Continuing the theme of covering the overhaul of the UKSF armoury, first with Glock 19s phasing out Sigs, then L119A2s replacing L119A1s, now we have the L17A3 (there may well be another rifle floating about too – but more on that another time). It is worth noting all the above have been used a while, and it is only comparatively recently that good reference material has come to light. It is hard to pin point the exact date things entered service, and indeed entering service does not necessarily mean wholesale adoption. 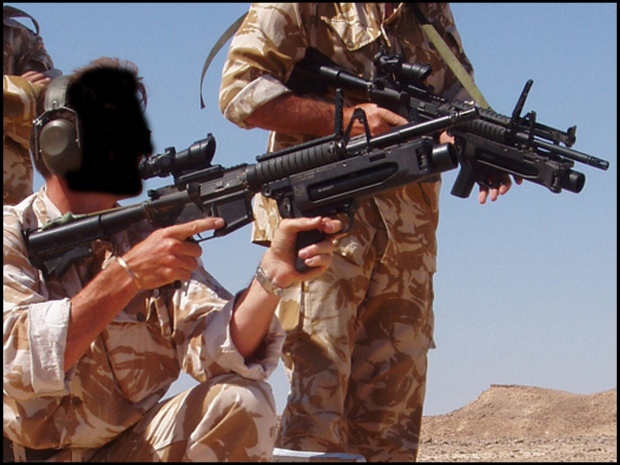 The L17A1, for those unfamiliar, is the underslung grenade launcher, manufactured by Heckler and Koch, which was fitted to the bottom rail of L119A1 SFWs – it is similar in concept and operation to the AG36 UGL. It has been in use since the early days of the L119 and the Afghan invasion, and represented the replacement of the M203 grenade launcher – the L17A1 in turn seems to have now been replaced, at least in part, by a new evolved variant. I saw textual reference to an L17A3 long before I’d seen a picture, which was pretty recently, but didn’t assign any particularly significance to it, indeed some ‘upgrades’ which warranted new ‘A’ numbers have been so outwardly inconsequential as to be near unnoticeable aesthetically. Recently however a mention of the weapon on a Facebook interest group, and later a picture, have clarified exactly what the weapon is.

A US Service M320 Grenade Launcher.

The general trend in grenade launchers, most obviously seen by the US adoption of the M320 (made by HK under the commercial name GLM) launcher, is for smaller standalone launchers which can be carried and used independently of an assault rifle. This has numerous benefits in terms of flexibility and weight, cutting the weights of an individual’s weapon, which will reduce fatigue and in turn increase accuracy – this will I’m sure be especially important given the number of other accessories now fitted to individual weapons. Additionally, the weapon can be stowed in vehicles and packs, passed between team mates and holstered with much greater flexibility than was possible before.

L17A1 slung by the side of an SFSG soldier.

Indeed, before the adoption of the L17A3, there is reference material showing the L17A1 slung as a standalone unit. It is not clear from the picture if the weapon is fired like that, or fitted to a rifle, however given it is slung handily from a belt, it suggests to me the weapon was used independent of any other system.

The L17A3 itself appears, in precis, to be an L17A1 with the stock and folding fore grip functionality of the M320/GLM.

The keen eyed will have noticed the feature picture accompanying this article is not in fact a photo of a L17A3, I am unable to share the photos of that which I have. The featured picture is a Photoshop mock up I produced using the reference for the L17A3, using an M320 picture as a base.  A number of precise details may not be perfect, the stock pad in particular, however this hopefully illustrates, broadly, what the L17A3 looks like and what grenade launcher is currently used by UKSF.

An airsoft blog focusing on articles, build and impression guides, reviews and anything else that seems interesting. There will be a UKSF Impression bias, but hopefully a few other things too.