The L119A1 build guide accompanying the previously reviewed Airsoft International Task Force Black impression guide has been largely recycled from a previous issue, but there’s no great problem with that, since as a direct addendum to an article which references the L119A1, it is useful.

Let’s put aside the super geeky things of the L119A1s idiosyncrasies in terms of front end cap, type of KAC rail, receiver profiles and buffer tubes – that’s too in depth for a mainstream magazine, they shouldn’t be looking to bog down in detail, so I’ll only assess if they get the main parts right.

They move from front to back across the weapon, so I’ll do the same.

Firstly they recommend a Madbull Surefire replica – which isn’t really a great choice given it’s a rather ropey clone, but they do correctly identify the mods needed to make it a little better. They also give a mention to the excellent Perr Mike suppressors which remain the best option for builds of the TFB era. Their advice on flash hiders is passable, they neglect to mention the Surefire birdcage which would be most correct for the TFB era, but do mention the 216A, which is correct for L119A1s, but too late for the TFB era (they also mention one is pictured on the opposite page, which is isn’t). 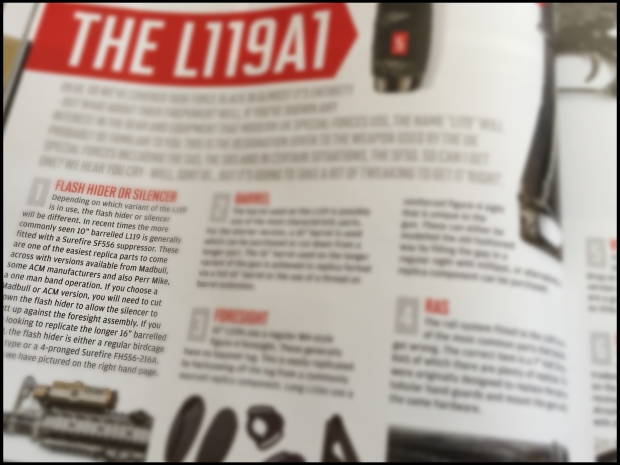 They generally get the barrel lengths right, and the method of achieving them. They then go on to mention the 10in L119A1s have standard M4 front sights but with the bayonet lug “generally” removed – this should be “always”. They do however differentiate between 10in and 16in front sights, therefore avoiding a common mistake made.

They generally get the KAC RAS correct, but for the few geeky details I will bypass, and although the KAC vert grip advice is correct, there were others used. The article doesn’t mention the other correct accessories for the front end, and here they should have mentioned the Surefire M600 torch and a PEQ box. The accompanying photo shows a PEQ-15, which isn’t correct – this should be either a PEQ-2 for earlier TFB setups, or a FDE LA-5 (distinguished by the railed adjustment dials).

For the lower receiver they somewhat muddy the waters by referring to the rifle being made by Colt Canada, while showing Diemaco trademarks. Personally if building a TFB era weapon I would go for Diemaco – certainly for an early one, although it is possible very late TFB/K era weapons might have been Colt Canada marked. Airsoft International also recommend Airsoft Machine Shop for doing the engravings here – this I believe is grossly irresponsible. While Airsoft Machine Shop produce excellent work, if sending a part to them for work you are odds on to lose it, or at the very least get it back about 6-12 months later after having had to harass them in the interim. They have left so many people out of pocket and lacking parts that to recommend them at all is really poor.

Pistol grip wise they identify correctly the Storm Grip (Stowaway Grip), however they then seem to go off on a tangent about Hogue Grips, which have been seen (albeit rarely) on much later L119A1s. A Hogue grip wouldn’t be correct for a TFB impression, and for some reason AI seem to think they represent a nightmare choice for AEG users – I am not sure why given Toysoldier have produced a trademarked rubberised Hogue Grip which will take an AEG motor. 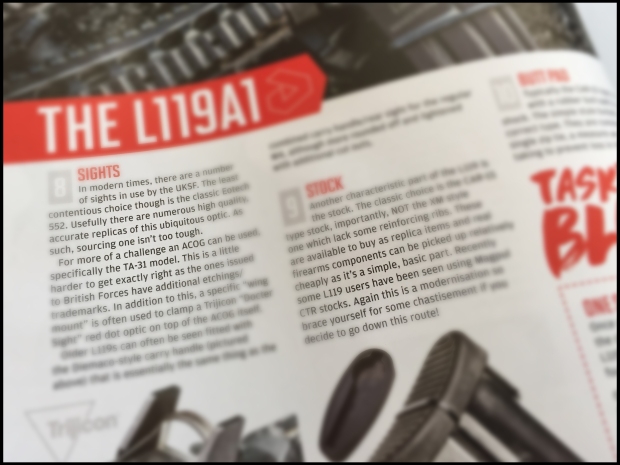 Next they address optics. The article inform us the least contentious choice is an Eotech 552 – while it is not wrong to use an Eotech 552, the least contentious choice is certainly an ACOG TA01NSN. AI then move on to the ACOG, but state the TA31 is the model used, which is incorrect – UKSF haven’t been pictured with this variant, and it would be a weird choice for a TFB kit. The additional information on wing mounts, mini RDS sights and DIS iron sights is broadly correct however.

They then move onto the stock and butt pad, which they get broadly correct, although mention the CTR would be incorrect for TFB era as it is too modern – this is right, although it does beg the question as to what was going on with the rest of the article.

Finally, while not mentioned in the article, the pictured sling mount on the example is a knock off Magpul ASAP, which is not correct for TFB era, and the example pictured isn’t a particularly good replica anyway.

Mercifully though they sign off this article with links to Warlord Tactical, who make excellent replica parts for the L119A1, and the L119 Owners Club group on Facebook, which I run, and where a lot can be learned about the platform.

An airsoft blog focusing on articles, build and impression guides, reviews and anything else that seems interesting. There will be a UKSF Impression bias, but hopefully a few other things too.